It’s taken almost a year but I finally made it to Gangnam.

Some background info on the area:

Gangnam is the richest area in Seoul and the song ‘Gangnam style’ refers to the lifestyle of the rich and young.

Both the Greater Gangnam Area and Gangnam itself are widely known for its heavily concentrated wealth and high standard of living, which has been compared to cities such as Beverly Hills, California. The most significant indicator is its extremely expensive real estate. As for its land value, the mere 40 km2 land of Gangnam district rivals with the entire land value of the city of Busan, the second largest city in South Korea.

Then, South Korea is known for its high standard of education and intense competition for university entrance, and Gangnam is considered as the national capital of education, which is one of the decisive factors to make Gangnam the most attractive destination in South Korea. In 2010, roughly 6% of the successful candidates to Seoul National University, which is considered as the best university in South Korea, were from Gangnam district, while Gangnam’s population makes up only 1% of the country’s population.

If you are not an American it is nearly impossible to get a teaching job in Gangnam as the parents demand that their children learn the American style of speaking.

Stephanie is leaving soon and so we decided to go to the Gangnam sign and a cat cafe (post about that is here) which is right around the corner.  As we were on a bit of a tight schedule these were the only two things we could fit in.  Though I would love to go back and explore Gangnam properly.

To get there you take line 2 and get off at Gangnam station.

When we got there we saw a huge poster advertising plastic surgery.  Something that is very much the norm in this area.

Exit by exit number 11.  The sign should be right behind you as you exit in the area called M-stage square. 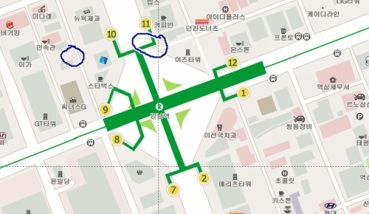 The other circle is the cat cafe we went to.  It was super cute. You can see the post about it here.

The sign lights up at night but we unfortunately were not there for that.  But it’s ok, we still got some good shots. They do have a button you can push and then music comes blaring out which is slightly embarrassing as everyone is looking at you and you are trying to do your best Psy impersonation.

It is obviously a very touristy thing to do but worth it as most people only know Korea because of that song. 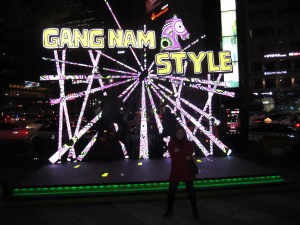 If you do go have fun letting out your inner Psy 😉